Our trip started in Namibia and Botswana (as you can read here), but this story begins in Mana Pools in Zimbabwe. Or actually on the way to Mana to be correct.  After Nxai Pan, we drove the terrible road towards Francistown and the boarder. It’s never been the best road, but after the major rainfall last season, it was truly filled with holes all over. Sometimes it was simply not possible to drive at a normal speed. The boarder however went quite smooth this time and fuel wasn’t an issue for once. Never obvious when you’re allowed what…
Anyway, we drove to Bulawayo where we stayed for the night after a long day of driving. The next day we had a little delay since the car needed a quick visit to the workshop before we could drive on. Something with oil, that’s as far as I get.

On the way I tried to get more skilled in taking secret pictures out of the window from the surroundings and the people we drove by. As you can see it’s quite colourful and it shows another side of Africa besides beautiful nature and animals.

Another stop for the night in Chinhoyi because driving in one go would have been too much pressure and probably not even possible this time with the workshop visit. We looked up some possible places before, but none of them were an option on the spot. So we called some helplines and luckily the second one told us about a little guesthouse. It turned out the place was paradise! We had a lovely dinner after a quick swim to get rid of the road dust. Met some nice people and had an unexpected great stay in Chinoyi. 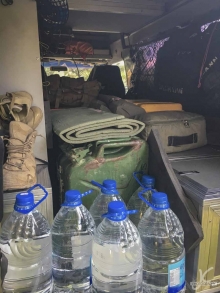 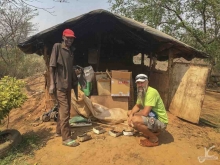 Next day back on the road with a fully packed car. Since there was a fuel shortage we went for fuel whenever we could. And for one reason or the other they were out of eggs as well. Luckily we don’t give up to easily when it’s about eggs…

Finally Jens bought some worms for fishing on the way and so we were all good for a long stay in Mana!

It’s always great to see friends again and as we were there as well in the beginning of the season (right after rainy season as you can read here), it wasn’t that long ago. I also had to get mentally prepared again for walking with animals all around. And this time it was quite different. Since there’s less green and less high grass (it was still quite high though sometimes) and more visibility, you can walk more. There are also more animals around though…

We started off easy with placing ourselves at the side of a pool early morning and watching birds flying in, fishing and fighting over a fish. As you can see that means quite some dirty shirts and crawling around for Jens. But birds are a good start! 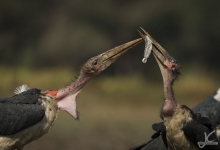 After a first encounter with a huge elephant bull (technically it wasn’t even really an encounter), I learned the thrill of walking. We walked alongside Long Pool. In the beginning it was quite open, so we could see animals coming. A breading herd of elephants was walking the same direction as we were. Because it looks as if they are going slow, but that is not at all the case, we decided to move to the side so there were some bushes in between us. There are herds that are totally relaxed, but we also saw very skittish herds who came from an area where there’s some hunting or poaching going on. And you immediately notice the difference, so it’s best to avoid an encounter with a breading herd… Better safe than sorry, right?

Just before we walked into a hippo. Once the big guy saw us, he just went for the water. But with the bushes at our left and the water at our right, I wasn’t too sure about the hippo’s. Because you don’t want to get in between a hippo and the water. So I looked left, deeply concentrated on finding possible hippo’s.

Finally he decided to move on and so we left the termite mountain as soon as there was enough space between us. So as you see, not a real encounter, but nevertheless pretty exciting! 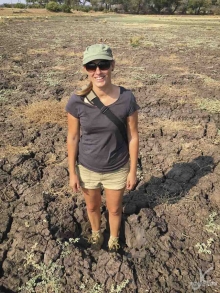 The walking soon became a normal thing and I turned into an expert in talking pictures of Jens in action. Since I can never compete with his animal pictures anyway, I went for my little personal competition. We found monkey’s on a termite mountain, elephants and their giant footsteps in the dried mud, tons of impala’s, hippo’s very serious about their boundaries, lions feasting on a zebra and hyena’s running off with the leftovers. Well actually even a lot more! And hippo’s are simply always the perfect sundowner subject! 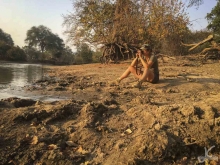 One day we we were on our way to friends of us, Tess and Dave, who have their own camp in Mana. On the road we found a little breading herd of elephants and not only were the small ones really cute, half of the herd was also laying down on the ground. Not something you see that often. So after a photographic stop, we were back on our way to Tess and Dave. And since they saw us coming, we did a little joke while driving…

Anyway, we were not the only ones paying them a visit that day. One elephant bull decided he wanted to make new friends. Elephants can be very social and curious, but this one took it a little too far. He came very close (especially to Jens, but he stood his ground), ate the carpet that was laying outside since they were working on a tent and even decided to join us for lunch! Can you believe it? Luckily elephants don’t like loud noises so when somebody started to bang on the pots and someone else on a drum, he left. 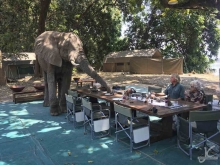 Elephants are always great company, but Jens still prefers the wild dogs over any animal. So finding them would mostly be our first task of the day. One day we were lucky since they were simply having a rest in the middle of the road. You couldn’t miss them. The next days they stayed around that same area, so we kept coming back as well. And while we were tracking them down, we bumped into another little group of people. It turned out one of Jens’s idols was right there with them! Art Wolf. So of course that was worth a picture. It doesn’t always need to be animals who make the day! 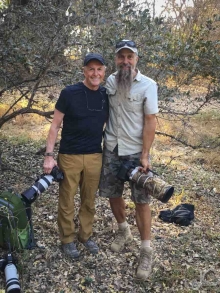 Sadly way too soon, it was time for me to leave. No driving out this time since Jens obviously wasn’t going to join me that soon. He had another two months Mana to go! Can you blame him? I couldn’t… Nevertheless I was pretty sad. But as you can see, my spot in the little plane next to the pilot, made up quite well. It’s the little things in life, right…? 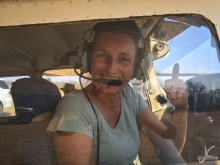 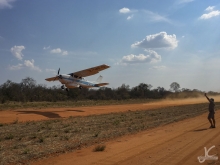