It wasn’t the first time we went to Scotland, but this time we actually had a special ‘goal’ or reason to go. Last year Jens participated in a competition about a teeny, tiny island full of birds. And… (drumroll!) he won the second prize! I think he should have gotten the first prize, since the winning picture was pretty average and even I could have taken it (probably not, but you get my point)! Anyway, yay!
The second prize was a VIP day on the island. Nothing really special (and for sure not VIP) but hey, it was a prize so we would go and ‘collect’ it!

So somewhere the end of July we took the plane to Edinburgh and went straight to a small, little coastal village called Anstruther. Since I got the task to organize the practical things (busses, B&B’s, car, etc.) and since Jens likes everything planned out nicely I was super prepared. So out of the airport we got immediately on the right bus and two hours later we arrived in front of our first hostel were we would spent the next five days. Smooth and without a problem! And what is the first thing you do when you get to Scotland? Right, eating fish & chips! We (ahum… Jens) picked the wrong place though, because we definitely had better before, so it was a bit of a bummer. Nothing a beer or a cider couldn’t flush away though.

The next day we had our first trip to the island of May. Always fun to see the same people again and for sure if they greet you by your first name with the tickets for the boat in their hand when you arrive. Not too bad to be back… We still remembered the whole intro (jokes included) of the captain after five times in a row last year. The boat trip was pretty though this time. High waves and we had to disembark at the other side of the island because there was simply too much wind to go the ‘normal’ route. A lady behind us, was a bit scared and excited at the same time so we got a lot of ‘OMG’ and little shrieks, which was quite funny. Also on the island we got recognized. Well, actually Jens, it’s the beard thing really! Unfortunately we couldn’t yet see his picture displayed yet since the lighthouse, where the pictures where shown, was only open for the weekend. So that would be for our VIP-day. 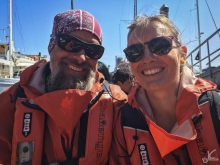 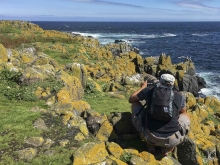 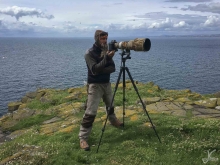 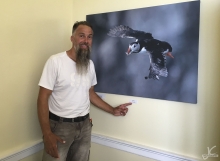 After that first day, Jens went two days in a row alone to the island, since I don’t love birds as much as he does, but for the VIP-day I would of course join him again, since I wanted to see the bloody picture over there in the lighthouse as well. There wasn’t much VIP though… We simply got a private little tour inside the lighthouse (it was still no weekend) and we could stay longer on the island so no more tourists around. Since it started raining a bit in the end, we were almost happy when we saw Roy, our captain, navigate through the little harbor. Anyway, mission accomplished!

Jens had one more day of puffins on the program and after that we left tiny Anstruther to see what the rest of Scotland looked like. We picked up our rental car a few villages and cities further up in Dundee and then drove more up to Aberdeen. The east coast is lovely and has some really pretty coastal villages and also a pretty castle (Dunnottar Castle) on a huge rock. We decided to have a look, but I guess we only went inside because I really had to pee. It was a bit of a tourist trap for us, because the castle was very impressive from a bit further away, but inside there were simply ruins and piles of stones. As you can see, we’re not that cultural I’m afraid… 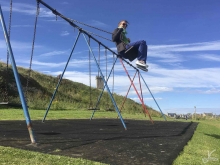 A bit further was another tourist trap, but this time a good one: an amazing ice-cream parlor in Stonehaven, where you got toppings (chocolate, marshmallows, cookies, etc.) on your ice-cream! Big scopes and great flavors as well. Jens also spotted a bright orange car and for those who know him… Orange (and for sure the combination with a fierce car) is a magnet for this guy!
That night we stayed in a very nice airbnb in Aberdeen and after dinner we decided to go to the pub for one (one!) drink. In the end we closed the pub after a lot more than one and most of them we didn’t even pay ourselves. Scots can really throw a party! And they are incredible welcoming. We sung, danced, talked and laughed a lot: we had a really good time! 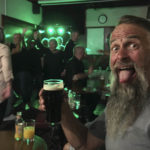 So it was a little slower the next morning towards Inverness and on the way there we got bad news: they cancelled our next airbnb! Just a couple our hours before we would arrive, can you imagine? We, pissed of course and now we had to find something else on a very short notice in high season. We tried to negotiate a bit with airbnb and got some extra money back because of higher prizes this last minute in high season and luckily we found another place quite close by so after all not too bad. The new place was actually pretty nice and our host was a real Scot who went to work in his kilt (ok ok, he was a guide for tourists, but it sounded real, right?)!
We decided the day after to go for a swim in one of the mountain rivers. The weather was mostly not that bad and even quite sunny, for sure if you have Scotland’s reputation in mind. Of course it rained that day, but we pushed through and found a place to go for a little dip! Pretty cold, but fun! We even found waterfalls were salmons jumped out of the water while they were swimming against the current. I obviously lost Jens there for a while since he wanted to shoot some pictures of these salmons. I knew it would be a new general point of interest the rest of the trip. 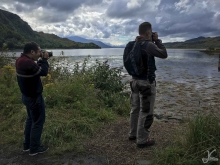 Our next destination was Isle of Skye, where we would stay for four days. On the way there we passed another stunning castle and we decided to stop to take a few pictures. One asian guy was clearly very impressed by Jens (or by his camera skills?), because he kept following and even imitating his every move. Extremely funny!

On to Skye! Unfortunately it was really busy and touristy there, in such a way that both of us got a bit weary of it. I wanted to see the Fairy pools (which were pretty, but a bit overrated and way too crowded!) and we again went for a swim. We found a pretty little pool all for ourselves with a small waterfall. The water was freezing, but it was really nice since the sun was shining and the surroundings were very iconic. We also went to the Fairy Glen (yes I’ve got a thing with fairies): very pretty, little, green mountains with rocks and some people once put the rocks in circles, so it looks quite fairy-like. Next to the fairy tail things we skipped most of the crowded places. Jens wanted to find more salmons to take pictures of(told you!) and we focused on good food and pretty, slightly abandoned places on Skye. This way we ended up all by ourselves in some kind of b&b for a cup of tea with one of the most peculiar people of Scotland. Really nice though! 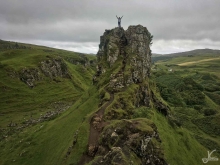 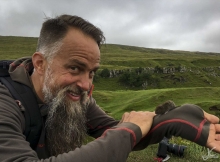 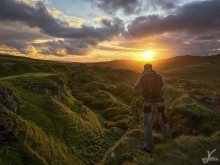 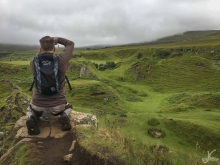 To get off the island we decided to take the ferry, but we didn’t buy any tickets in advance (so far my super preparation). No luck, we had to wait for the next one. Damn! There might possibly be some extra spots on that first boat left and Jens’ beard got us on the first ferry after all since a guy shouted: ‘The man with the beard wanted to come on as well!’! Hail to the beard!
The fjords were we drove afterwards, direction to Glencoe were really pretty: stunning views and we saw quite some seals again. We stayed for two nights in Glencoe in a bed & breakfast at the boarder of the forest and close to a little lake. Very nice for walking. We were not always that fortunate with the weather however, so on a rainy afternoon we took it easy. Our host was a real talker so both of us tried to make the other go when we had a question, because it meant at least ten minutes of your life lost. The surroundings were magnificent though, even in the rain. Scotland truly is a stunning country! 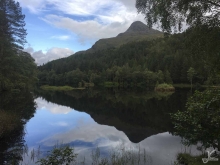 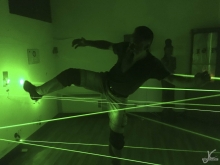 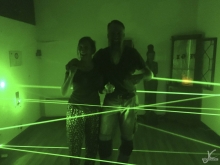 For our last night we returned to Edinburgh and since I like playing games, I dragged Jens along with me to play an escape game. We did that for the first time together last year over there, so it seemed only right to try again. Another room this time of course! To be honest, we were a bit lost in the beginning and ran around like crazy, but once we got the hang of it, we did not too bad. We finished in time and even with more minutes left than last year. Yay! It was the official end of our Scotland trip though. After a last (really good!) lunch and a stroll in the sun, we drove back to the airport, handed in the car and were ready to take off again. Back to Germany and to the next adventure!