October started pretty different, since Sofie left and after more than a month traveling together, it does get to you. So I had to get used to being by myself again and getting back in my own rhythm. And in the beginning I did feel a bit lonely…

Nothing the bush can’t solve though! 😉 And luckily I’ve got quite some friends over there… Like Stretch, the Mana legend. When people ask him how I got his name, he answers: ‘I was born on a loooong weekend!’. First time I heard that I almost cried from laughing…
Mana is such a beautiful place and it has this thing about it. You can always tell when it’s a picture taken there. A bit of a fairytale background, the blue haze, the atmosphere.

One day I was looking for the wild dogs and found them early afternoon. So I decided late afternoon to go back there since they only get active around that time. On my way back afterwards I walked into the lion you see on one of the next pictures and he got up and started charging me. We probably both were surprised by the other. I stood my ground and later on went a bit around and that seemed to be fine by him as well. 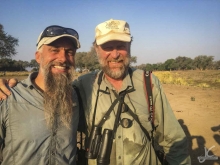 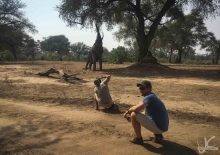 When it’s a calm day birds are always a good target, since there’s always birds around. Of course I always try to find that little extra thing, like the moment they drink, eat, fly or just enjoy the sunset as I did… And while I was walking around to see what more I could find, this pair of terrapins showed up.

Wild dogs are my favourite animals to photograph. So it’s always great when you find them and even better when they are in full action. Whether that is hunting mode or playing, it’s both entertaining. Best times to catch them when they are active is early morning or late afternoon. So a lot of days I would start with the wild dogs or end there. Or both. I saw them several times hunting, but always missed the kill. Although they missed themselves as well.

Here you see them playing late afternoon. Curious when it comes to other creatures (like us) or vultures or sometimes they simply chase them away as you can see.

It’s a thin line though. Sometimes it looks as if they accepted the other one around, sometimes they would hunt them down. They chased the buffalo’s from a drinking spot, but a bit later the buffalo’s came back and took their ‘lost ground’ back. One wild dog tried to stay his ground, but in the end he followed the rest. Not worth a fight and for sure not by themselves. But some days before they actually took down a buffalo.

Same story with hyena’s. They mostly don’t like them around, especially not when there are pups. Then they chase them away, like they did here. During the chasing they even passed some zebra’s and my car. But another time I’ve seen wild dogs and a hyena eat from the same carcass. Very strange!

One day I was invited in Tess and Daves camp and there’s a regular visitor. They call him Happy the hippo. He might not be that happy though since the other hippo’s tease him and so he wanders around the camp every ones in a while. Also a big elephant bull paid us a visit. 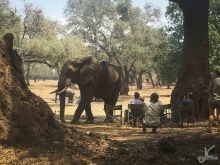 A few nights later there was all of a sudden a big rain. When I say big, I truly mean BIG. My tent nearly collapsed because of the strong winds. Pretty scary and intimidating. What if one of the trees around would brake and fall on the tent? Luckily they all stayed right where they were.

The next day Mana Bridge was flooded and a big log blocked it as well. Quite a problem for people that needed to fly out and couldn’t get to the airstrip. In the end a tractor came and pulled the log away. 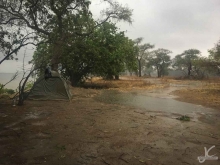 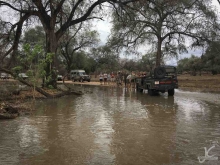 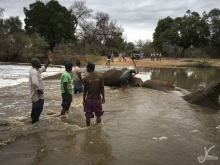 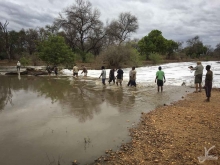 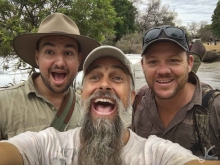 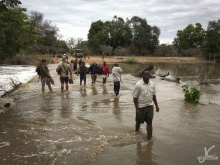 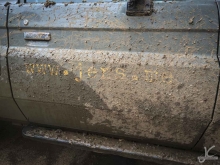 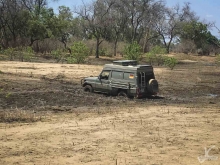 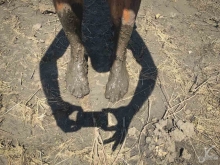 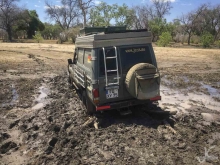 One of the last days of October I found this old lion, almost next to the road on an eland kill. It was the same one that chased me in the beginning. I have no idea how he managed to kill this eland bull that looked in his primes! It happened the night of the storm, so maybe something else happened as well… Truly a mystery to me. The lion looked quite thin so I’m sure he needed this badly. It took him nearly a week to finish it and he was quite protective. Nobody was going to steal his meal away. 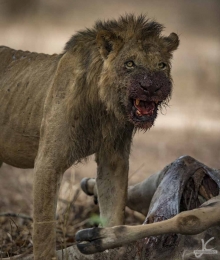 October was not a bad month, but the rains in the end changed the circumstances quite a bit. The mud made it harder to drive and messed up my brakes. I was a bit hoping it would get better soon, otherwise it might get tricky in November… You’ll read about that in the next post!