We had a bit of a bumpy start this Africa trip. The end of February we landed in Windhoek and one day later we spent the day in the hospital (at least part of it). All of a sudden Jens had a big bump on his elbow. Well, the word ‘bump’ doesn’t really do justice to the thing there, since it was huge, but you’ll get the idea. Probably it was a late effect of falling down in Mexico, although it was a bit strange that it only appeared a month or more later. A true mystery! But armed with some advice and pills, off we were!

First we decided to drive down south, direction Sossus Vlei. On the way there we had a famous apple pie in Solitaire and we camped in Agama River Lodge. I really recommend it! We arrived in Sesriem Rest Camp the next day and it was really hot. You know this feeling when the little bit of wind there is, feels like a hairdryer blowing hot air into your face.
But we were there with a mission (at least I was!): we would see and do all there was to see and do! So we hiked up the dunes, drove down to Sossus Vlei and Dead Vlei, took pictures at sunrise and sundown, went to Sesriem Canyon and the icing on the cake: we did a hot air balloon flight! I never did that before and it was truly mesmerizing. We left very early in the morning. Well, let me rephrase that… We left in the middle of the night, but it was absolutely worth it! Seeing the sun come up from out of this little basket was simply breathtaking. We were lucky as well, since the wind blew us right into the national park and therefore we were able to have breakfast on one of the dunes! How amazing is that? It was stunning, I kid you not. A once in a lifetime experience I’ll never forget.

Jens thought about trying some night shots in Dead Vlei, but obviously you can’t stay there during the night, so he was doubting whether he would leave his camera there and pick it up the next morning. In the end we decided not too, because the weather forecast said it would most probably be cloudy. They even expected rain! Can you believe it? Not a drop of rain for months and months and exactly that day rain. Anyway pretty useless to go for star photography when there are no stars to see.
Luckily we didn’t, because the next morning it was a true storm. I’ve never experienced that much wind. Having breakfast or cooking was simply not an option. When I went to the bathroom, I found a couple having breakfast in there! Can’t blame them… we decided to leave one day earlier than planned, because it wasn’t possible at all to take pictures like this. 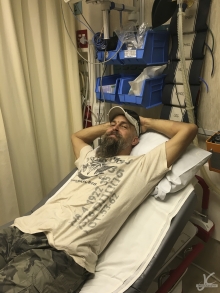 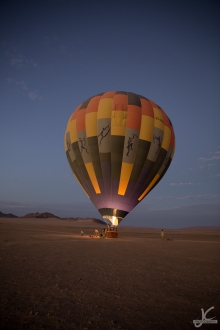 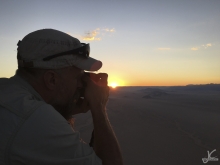 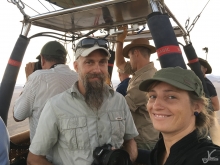 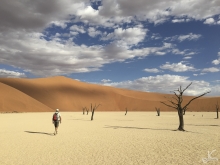 So we drove back up north direction Swakopmund. The surroundings and landscapes in Namibia are truly amazing. Almost everywhere. So the ride is always an adventure in itself. Since we planned to drive through Messum Crater, we had to get a permission for that. Yes, paperwork is also a thing in Africa! We passed the Cape Cross Seals Colony and men, do they stink! Even hours later I still had that smell in my nose! They were loads of them, but they were kind of cute as well.

Messum Crater is quite special. Totally desolate and barren. They only plant that grows there is a very special one: the welwitschia. It takes years and ages for it to grow and the plant takes its water out of the air. This is also why they grow here, since it’s quite close to the Skeleton coast of Namibia, where there’s this typical fog in the morning. The temperature here compared with down in the south in Sesriem was also a huge difference. We even were a bit cold out here! We found chameleons hiding under the big leaves of the welwitschia and that was about the only visible sign of life. Sometimes we passed salt plains: rocky but covered in a thin layer of white salt.

Next we took the divorce pass. Not an easy drive and sometimes you feel the road just vanished. Getting fuel was also a mission sometimes in the middle of nowhere. This one tiny fuel station had one pump and was only opened at certain times. We arrived during the guy’s lunchbreak, so we had to wait while he was only 100 meters away sitting a bit around. You must love it!

After Messum Crater, we went to Warmquelle, where we camped at a campsite that was not too easy to find at the Ongongo falls. Since it got hot again during the day, we went for a swim in a rock pool at these falls. Really nice until we came out of the water covered in leaches! Ieuw!!! That was it for swimming!

Next we drove up to Opuwo where we went for a luxury camping on top of the mountain: Opuwo Country Lodge. Beautiful infinity swimming pool with an extraordinary view. Truly beautiful!
After some laundry, grocery shopping and getting organized again we would leave for a week into the north of the country, where there were no shops or anything on the road at all. 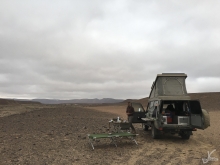 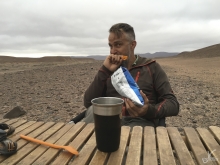 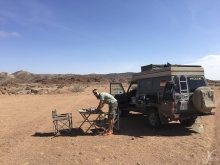 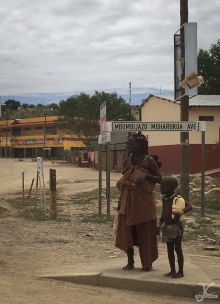 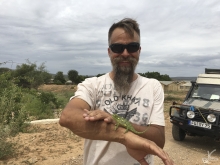 We started direction Purros, which turned out to be a gorgeous drive there. We saw herds of zebra and oryx with majestic mountains at the background. They were very curious, but quite skittish as well. On we drove partly through a dry riverbed, where we saw proof of elephants and even heard them (cracking branches), but never saw a single one! Spooky! The campsite in Purros seemed quite mysterious too since we had trouble finding it and it looked as if no one had been there in ages. But soon the answers got revealed when a strange lady with brown teeth appeared and told us the campsite had been washed away lately. So the dry riverbed isn’t always dry. That explained a lot. We could stay there, but there was no water. That probably explained her messy, ragged look. Not the brown teeth though… We stayed for the night and she asked us for a ride, but we were going the wrong way for her. More up north.

The north of Namibia is truly dazzling. Dramatic landscapes that simply make it impossible not to stare out of the window while driving through. Every once in a while we had to cross a river and that means first test it on foot. Could get really muddy then and this kind of mud really sticks, I tell you! We saw giraffes, zebra and oryx and huge rock formations.
And in the middle of nowhere is Orupembe, there is one teeny, tiny, little shop, called ‘shop number one’. Of course! So we simply had to stop there for a cold savannah. 11 in the morning, so the rest of the day was absolutely fun! 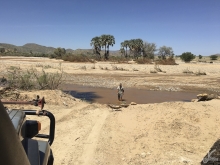 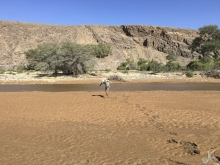 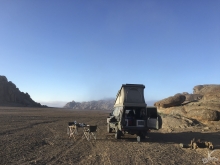 Hartmans Valley was our favorite place in the north. It is so extremely pretty: the dunes and there special shape, the waving, golden grass (we were there in right after rainy season), everything. We drove on to Marienfluss and to get there we had to take a steep pass. While Jens was fully concentrated driving up the tricky pass, I thought I saw some mint growing, which I promptly asked him, without thinking. ‘Is this mint?’ I think he almost threw me out of the car.

After camping at Camp Syncro, right at the boarder with Angola in Marienfluss, we drove back direction Opuwo, which means another cold savannah at shop number one, where Jens even did a photoshoot. This time I was the photographer. Could come right out of a magazine, no?
And we did a real photoshoot with the two of us, since I insisted to at least have one nice picture of us. You can clearly see who’s in charge when it comes to positioning, right? 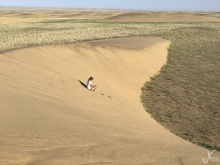 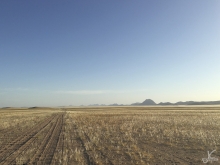 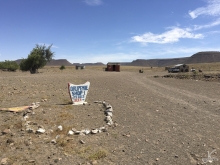 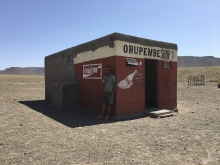 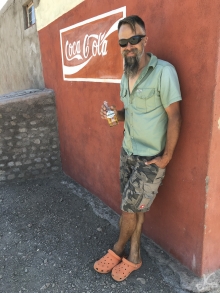 After a second visit to the infinity pool in Opuvu we drove up to the Caprivi strip. Rundu was a very strange city for us and we both didn’t like it at all. It was also the first time we didn’t feel 100% safe. So it was only a quick visit and we continued straight away to Ngepi Camp. A very nice campsite close to Divundu at the Okavango river. They had the best showers, toilets and bathtub ever! Outside, looking at the river and with lots of funny accents. Like this one toilet where there were two in one room: one for men, one for ladies. Priceless!

Our next campsite was much more basic. There was nothing except an old little ‘toilet’ but the bush was actually more appealing. We really had to search for this one campsite though and all we new was ‘campsite number three’, somewhere at Mudumu national park. It was worth the search though, because we were totally alone. Well, besides the zebra’s, hippo’s and other animals of course. Very peaceful. Jens even caught a fish.

And the last campsite on our trip through Namibia was Camp Chobe, right before the border with Botswana(Ngoma Bridge). We were really lucky since the water had just come in, so not only did we see lots of animals at the shore (the other side of the water is Chobe National Park), but also thousands and thousands of birds. And the best way to see all of this is of course by boat. It was truly magnificent! Back at the lodge after the morning ‘drive’ we were taking a break when all of a sudden Jens spotted an olive grass snake. End of the break and back to the camera as you can see…

Namibia is a mesmerizing country with breathtaking scenery, that will stay with you for ever. On to the beauty of Botswana and its animal life! 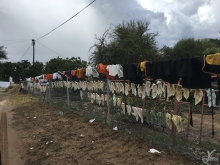 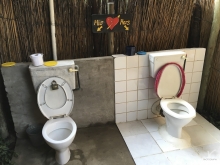 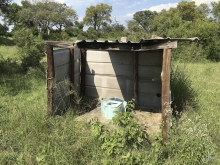 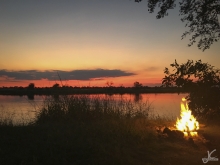 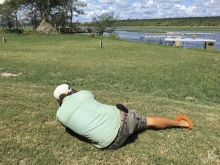 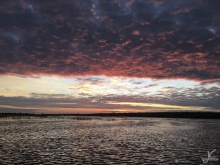