After freezing cold Matopos (read here), we drove back to Botswana. Our first stop on the way to the Kgalagadi was Francistown. The cold got even a bit worse, since we got rain on top of it. Started to feel a lot like Europe. And when it rains and you’re camping in your car in Africa, you’re pretty limited. So both of us were squeezed in there, with our computers downloading pictures. No time waisting here!

Next we drove to Khama Rhino Game Reserve since I had lacked rhino’s on my trips to Africa. Only once we found one rhino in South Africa’s Mountain Zebra National Park. After two nights there I’d seen more rhino’s then I thought were left on this planet. So off to our last stop, Gaborone. We needed a new radiator for the car and of course also supplies for 12 days Kgalagadi. 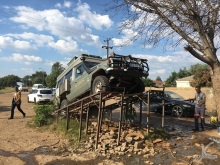 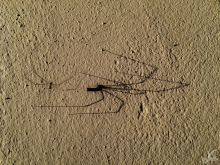 With a brand new radiator, a very clean car and supplies that would probably last for the rest of the trip, we were all set and ready to go! After a last stop at Kalahari Rest Lodge, right after Kang, we had to change a battery since the car suddenly struggled with starting. Typical… being in the middle of nowhere with car problems, right after you were in a workshop in the capital… Damn Murphy! Anyway, we found one, reduced the tire pressure since we would be driving sandy roads from than on for quite a while and camped on a beautiful spot right outside of the park. We got to see our first lion already right there. Promising!

Our first campsite was a real luxury camp and we would stay there for five days. All right! We had a shower and a place to do the dishes (with running water!!!), a drop down toilet and a wooden shelter. We set up our ground tent (finally!) and were all set to go explore. We didn’t see too much at first, including cars. It looked as if we were almost the only ones in the park. Strange when you know you have to book so long in advance to get in here. 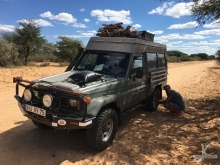 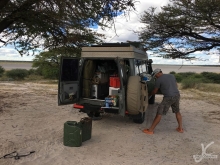 Day two we had done a big loop and on our way back Murphy struck again. Big time. Out of nowhere came a car around the bush and BAM! Full frontal collision. My head hit the window and afterwards I learned that my knees left a print in the metal glove box right in front of me. Jens caught up the shock with his hands and arms, so the steering wheel was all bend and his wrist was hurt. I had a big bump on my forehead.

The other car where an older couple from the Netherlands living in Cape Town already for years. The were buckled up and airbags went off, so they were fine. Shaken up and a bit of pain from the seatbelt but nothing serious. Luckily it was only material damage. But well, pretty serious damage. We turned out to be quite lucky. Jens was still able to drive an from outside it looked like there was almost no damage besides the bull bar and some little things. You don’t know however whether there is some bad damage that you can’t see…

Another lucky thing was we weren’t too far away from the entrance gate and Jens had a satellite phone to call for help. We called the gate and explained and they said they would sent someone. The other couple called their insurance and they tried to organize a towing vehicle to get them back to South Africa. That turned out not to be too easy.

After some hours waiting in the shade at the side of the road (with off course no cars passing by), we heard a motor coming our direction. All of a sudden it stopped though. Nothing anymore. Jens took the binoculars and jumped on top of the car. He saw something red, which isn’t a typical bush color, so he decided to walk up there and see if he could get some help. It turned out to be a red tractor sent by the office. Unfortunately the tractor had broken down right before reaching us. “Could we help them starting again?” Only in Africa… So believe it or not, but Jens drove off and helped them start so they could drive up to us where they broke down again. Great help! After some fixing here and there, he got started again and drove off to get help. Yep, calling didn’t seem to be convincing enough. Later we learned they broke down again a kilometer further. The tractor has stayed there for the next few days.

In the afternoon around three a police car finally came. A nice lady from the gate accompanied them and explained us they didn’t have a vehicle at the moment because it was out. Therefore they tried to reach us by tractor. The female officer told us we had to come to the office to write down a statement. We looked at her in true disbelief. She wanted us to drive out of the park, 200 km further away to the police office to sign a statement?! Well, they didn’t bring the papers, so… Really?! This is Africa…

We persuaded them to simply write everything down, make a statement and bring it later to the gate. Email was not an option, since they didn’t have that. Or they weren’t allowed to sent it through email. That wasn’t entirely clear. We tried to tow the other car from the road, but since it was an automatic, it didn’t work. So the other people would stay in our ground tent at the campsite and we would sleep in our car again. First we drove to the gate with the nice lady and she helped us doing some necessary phone calls. Than off to our campsite. They would bring the other couple later. Only then came a little aftershock. Both of us were exhausted and there we were. Simply sitting silently, holding hands. Happy that we didn’t have to go through it alone.

Afterwards we had dinner with the Dutch couple. Luckily there was no blame or no fault, so we actually had a very nice simple dinner together. With good south african wine. Nothing wine can’t solve, right? 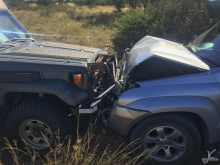 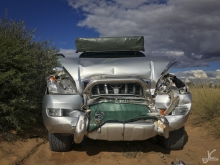 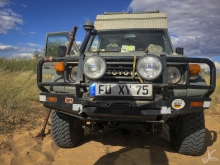 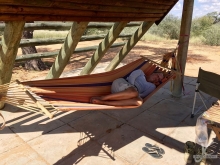 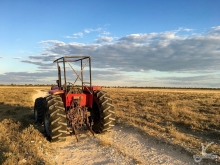 I had a bit of a fright afterwards driving the car. I saw cars behind every bush and corner. I also had some bad headaches, the light hunted my eyes and sounds were also painful, so I skipped some game drives and took it easy. After a few days we had to drive half of the park since our next campsite was at the other side of the park. I drove the entire trip with some kind of blindfold over my eyes.

The rest of our trip wasn’t what we had expected, but honestly, I don’t know whether that is due to the accident or because Kgalagadi is just not our park. Maybe a bit of both. We saw some nice sightings and the surroundings are sometimes really beautiful, but in total we weren’t blown away.

We even decided to leave the park a bit earlier via Namibia, so we had some time left in Windhoek to sort out what needed to be done with the car. Because the park is partly Botswana and partly South Africa, we had to drive around via Two Rivers to get our passports stamped to be able to exit the park through the Namibian boarder post. It had been a rather bad ending of our trip, but we kept on the good moods anyway and as you can see we were still able to laugh, don’t worry! Nothing nutella can’t fix this time! 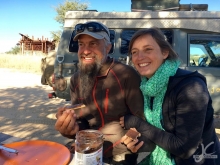 Since we gained some time by leaving the park earlier, we ended up in Keetmanshoop were Jens wanted to do some night photography with the quiver trees in the background. He even tried a 360° star trail.

We found a little cute campsite with a great hot shower, that we truly enjoyed since it could still be quite cold in the mornings and the evenings. At the campsite was a big tree with a huge nest that covered up at least half of the tree. All social weavers. And also two little pygmy hawks that were given permission to live with the weavers.

After a couple of nights getting back on our feet, we drove back to Windhoek and started sorting things out for the car. Well, Murphy was with us this trip, no doubt. A little less for our next trip wouldn’t be a bad idea though…