Almost 12 o’clock and we were driving the cutline from the Central Kalahari Game Reserve (CKGR). We found a new route to get there from Maun, that was supposed to be faster then the ‘normal’ one and since we’re adventurous (Jens would definitely disagree on this one!) we went for it! We agreed to meet a friend at the entrance since we were about to stay there together for 9 days.

It had rained a lot lately in Botswana. The Delta was flooded, the road to Nata was not drivable anymore and there were different versions when it came to the state of the road in CKGR. Turned out there was nothing to worry about and the road was… well as good as it gets over there. That means quite bumpy and sandy. After a bit more than one hour we arrived at our campsite. We set up camp, which goes quite quick for us, but our friend Frank had more trouble with it since he’s used to a stationary camp. This time however, we wouldn’t stay longer than two nights at the same camp spot. I must admit it was a little bit funny seeing him unpack a huge fridge and basically create a little kitchen in the middle of the bush. Impressive though!

Our first afternoon game drive was quite interesting. We saw a group of giraffes, lots of oryx and on our way back to camp we came across two little jackals who were not intimidated at all and just walked next to the car, playing around and even sat down next to us. So cute! And right before sunset we even spotted a group of lions, although it wasn’t that hard to spot since there were two other cars standing next to them on the road…

The next day we were less lucky, but we did have an amazing breakfast what made Jens decide to go for a little nap. On the table. Meanwhile I was trying to take some pictures of a squirrel who was clearly used to humans, the little creature walked straight up to me (yay, great pics!) and then bit me in the tow! Can you believe it? Luckily it wasn’t hard at all, I think he was either hungry or up for some playing. Either way, I decided to ignore him for a while and simply read a book although I kept a close eye on him. 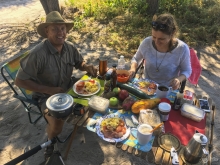 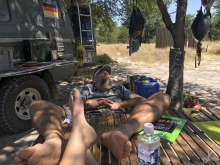 After two days Frank got some trouble with the spare wheel under his car, on the way to the next campsite, so we had to take it off. The tire tracks of the road were quite deep, so the tire was dragging to the ground. After that we played around a bit with the walkie talkies, although there wasn’t much to report. We made each other believe there was though. They sadly just missed it! Always fun! In the late afternoon we got lucky again, because we spotted three cheetahs. They were quite far away and a bit skittish, but still, cheetahs are never a bad find, right?

The next morning we tracked them down (well that sounds more professional then it was, but not a lie, we truly did!) and stayed with them for a while. It turned out to be a mom and her two cubs. The cubs were already quite big because the day before we thought there were three adults. The advantage of going around (and not stay in one place) in CKGR is that you’re more likely to be on your own which is always great. We were able to follow them for a while and even saw a hunting training and one of the cubs tried to climb a little tree to get a big bird who was peacefully sitting there. The bird flew away quite displeased, so no luck for the cheetah obviously. By the way, this park is a great place if you like birds. There are so many different species and a secretary bird or a big cory bustard become part of the background really fast.

Anyway, we continued our loop around and after one more stop we arrived at what would soon become our favorite part of the park: Piper Pan. It’s not too big and there’s always something to see. Or maybe we were simply lucky! And although the sunsets in Africa are always beautiful, they seemed to be even a little prettier over here.
The first morning we found three lions walking. One gorgeous male lion with the typical black Kalahari manes and two strong, graceful females. They laid down on the road and next to us, which gave us amazing photographic opportunities. It was early morning, so the light was great. We stayed with them the entire morning and when we came back in the afternoon they were still there, although they went for some shade. More difficult to see, since they laid down under a bush and we almost missed them! 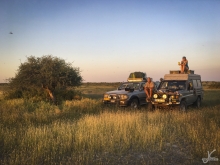 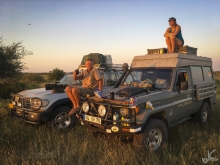 The next morning we noticed there was a lot going on on one of the pans and when we approached, it turned out two cheetahs had made a kill and a bunch of jackals were fighting over the remains. Lots of crows hoped to steal a little bite as well.

On went the trip and we continued our loop to the next campsite that turned out to be a bit of a disappointment. First of all there wasn’t much to see, but there wasn’t ablution either (mostly a bummer for me to be honest) and no shade at all. So we decided to have our afternoon nap somewhere else in the shadow and in our hammock. On our afternoon drive, Frank scared the hell out of a lion who was laying right next to the road. When he passed another car that was standing still (of course because there were lions!), the lion jumped up out of the high grass (you really couldn’t see him I must admit). Eventually he went back to nap-mode two meters further away from the car. Funny sighting though! 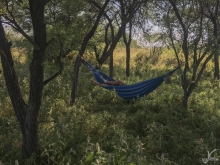 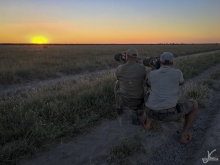 Our loop ended were we started (or at least quite close) and we even finished with seeing the same big group of giraffes and some lionesses as we did in the beginning. On our last evening we were sitting down right after sunset. I was cutting some vegetables and all of a sudden the whole table and the floor started to tremble and shake. First I thought I had one savannah too many, but it turned out to be a major earthquake! Afterwards we learned we weren’t that far away from the epicentrum. It was quite amazing to feel the ground shaking like that, see all the trees shiver and the birds woke up and slightly panicked. It was a very special end to nine lovely days. Kalahari we’ll be back!