Since Mana Pools is by far Jens his favorite park and since he stayed there almost three months last year (read here part one, two and three), we decided to have a look right after rainy season. What a difference! Actually in the end it turned out to be still quite in the rainy season, since we even got rain while we were there as well. It made the roads (and everything) really muddy, but the sunsets and the views beautiful dramatic.

But let’s start at the beginning. Getting there was truly a mission this time. And not because of the car, but because of the countless roadblocks. It was right before Easter holidays, which probably wasn’t the best moment to drive up there. We had at least 30 of them, I kid you not! And it’s not the constant stopping, but the ridiculous requirements and fines (or attempts to fine us). Can I see your warning triangles? Sure! Digging up the triangles and turns out they want them to be reflective at both sides. God knows why, since cars only come one way when you have a break down and since you have two of them. We also had a tiny little crack in one of the backlights. The light was working, the plastic around it was fine, but the crack couldn’t be there. The first time I got angry. I do not well with stupidity…

Afterwards we started to look at it as a game. We would talk them down! Either Jens simply started to ask them questions until they forgot what they actually wanted to ask themselves or I wouldn’t stop talking about the word ‘effective’ they used considering the cracked lights. In the end they were so tired of me, they waved us along. And one time we even bribed them with german candy. You get creative after 30 roadblocks…

We forgot the terrible roadblocks right after arriving though. It’s such a beautiful park and since it’s quite small (at least the part where you mostly drive around), it’s a bit a community as well where you quickly get to know people, places and even the animals. Some elephants have names for instance.

We couldn’t do a lot of walking because the grass was really high at most places and the bushes thick. One day we did a little bit of walking though to this old hollow baobab. You can get totally inside of the tree, which is quite something. It’s really a special feeling standing inside of a tree. And the most amazing part of it is that the tree is still alive. While walking back we found fresh tracks of a lion in the mud. Only then I realized we could actually walk into a lion at every moment. Definitely not the same as sitting in the car!

On a morning we found the wild dogs. The vultures betrayed them. They were not too close to the road, so we walked up to them, which was amazing. For me at least, because photographically there wasn’t much to see since the grass was so high. But exactly that makes it rather exciting. It’s really a different experience being in Mana in april, compared to dry season.

Animals are therefore harder to find, but Jens is a master in finding something interesting to photograph (I mostly don’t qualify), so at the campsite he found for instance some sunbirds on the flowers and a kingfisher in the tree. I simply found tons of mosquitos. Although I didn’t even see them, just the prove of their visit they left on my legs.

Beside the mosquitos it was lovely. We only stayed for a week this time, but I know Jens was already counting down to dry season. Very possible he can tell you exact how many days are left before he returns there. 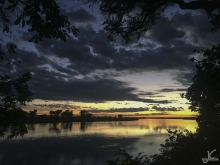 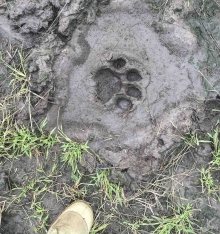 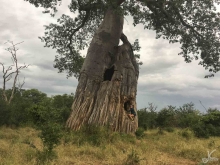 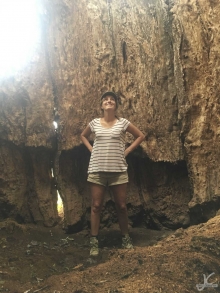 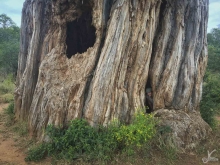