After Nxai Pan and Makgadikgadi (read the story here) we stayed in Maun with friends until our car (broken axel) was fixed. It took some time, but in African terms, it went smooth and fast, truly! Next some shopping for the following part of the trip and we were good to go! Plan was to drive into the Okavango Delta, to visit friends in Khwai.

So the next day: off we were! After a couple of hours driving sandy roads from Maun, we arrived at Maghoto Campsites, where we would stay the next few days. On our very first little game drive in search for the right camp spot, we bumped into a bunch of giraffes. They just went for a drink and were heading back into the thickheads. They are such graceful animals and my personal favorites. Jens had lunch in his head…

Friends of us live and work here, so we went to visit them and did some game driving together with them. He’s an amazing photographer and a terrific guide who is seriously obsessed by leopards. In the good way! So that’s what we look for mostly.

The very first game drive we found Mmatsebe, the female leopard we’ve known for years, calling for her cub (read their previous stories here and here). We stayed with her, since the chances where quite high he would still answer and come, which he did. He got bigger again and almost looked like a fully grown male leopard. It wouldn’t be too long before he would be on his own, but for now mom was still good company! It was so cute to see their reunification. They were really playful with each other and afterwards they went for a walk together. Since they didn’t seem to mind our company we went with for a little while.

One evening we found them again in a little tree at the waterside surrounded by high grass. They had a kill up in the tree and the cub was eating from it. Mom was on the ground looking for something in the high grass. All of a sudden a third leopard came out of it. Can you believe it?! It was a male leopard and they tend to be more skittish normally. This one turned out to be ‘dad’ (thanks to our friend and guide Shaun we know!) and it’s not common to see him at all. So seeing three leopards at once, was simply top of the bill and unbelievable!

The next morning we found the cub still guarding the kill from the night before. It looked as if he listened to mom to keep it in a tree, but didn’t really got the whole concept, since the leftovers from the impala were hanging down and he was eating it and playing a bit around as well. Mom clearly never told him to not play with his food either. 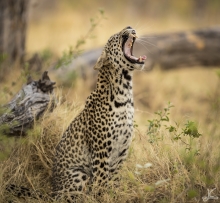 Next to leopards, we also found a big pack of wild dogs with lots of pups. Always two grown ups would stay with the pups while the others went for hunting. Afterwards they returned and regurgitated their food, so the pups got food. They would all of a sudden start running around and making a lot of squeaking noises, so we knew a dog was coming. All the pups would surround that one dog in the hopes of getting some food and when they did run away with it to eat it in peace. Survival of the fittest from a young age! They are so cute and playful though. Never boring to watch!

One morning all the cars seemed to be looking for the wild dogs again. We don’t like crowded sightings, so we drove around on our own and suddenly we spotted five lionesses walking along the riverside. It’s so wonderful to be totally by yourself on a great sighting! These lionesses where also very playful and chased each other or did a little play fights. Not always easy to keep up, because they can be really fast all of a sudden. They greeted each other when they came close with their heads gently rubbing each other. Such a cute gesture. After a while they found a stretch in the river where it was narrow enough to jump over which they also did. Then all of a sudden other cars drove in, so we left them, but enjoyed our little private show a lot!

That same day we were heading towards our friends again after our morning game drive, when we found a car clearly in trouble at the other side of the water. We crossed and turned out they indeed were stuck. The water crossing went wrong and some of the blades of the fan broke off and damaged the radiator. The liquid in there was leaking, so not good! Jens had several incidents before, so he actually became a bit of an expert and a bush mechanic. Impressive, I promise! At least, I’m very impressed by it and so were Jim and Sharon. He basically took the radiator out of the engine and fixed it. You’ll never guess what you’ll need to do that… A raw egg or some curry powder! Now tell me he isn’t a real bush mechanic.

We had started so fanatically however since Jens knew how to fix it, that we didn’t think it through. It would have been much smarter to first look for a little bit of shade. I admit we were on the wrong place for a lot (no trees around), but we must have been able to go for a little bit, right? And once started, there was no way back. We needed to fix it! So we got all boiled and Jens his back was really burned afterwards. But it’s as real as it gets, for sure when elephants and zebras pass you by and look curious to what these crazy creatures are doing in the middle of Moon Scape (the area where we were and the name gives away it’s not really too much coverage) in the heat of the day. But Jens managed and we all could drive on four hours later! Pfieuw… You can read their story right here! 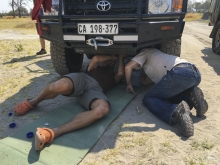 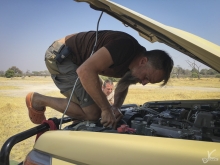 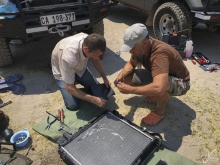 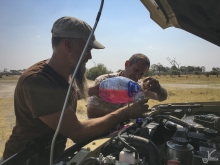 And to end with I’ll show you one of my favorite pictures Jens took this trip. One evening we found some hyena’s at the den. Another car was parked there too and mostly, as you know, that would be a pity, but now the headlights of the car actually gave the setting a beautiful dusty look, so we positioned ourselves to be able to get the best out of it. It appeared I wasn’t the only one liking this picture so much, since he was runner up in an italian competition (Oasis, category mammals)!  Not too bad huh? 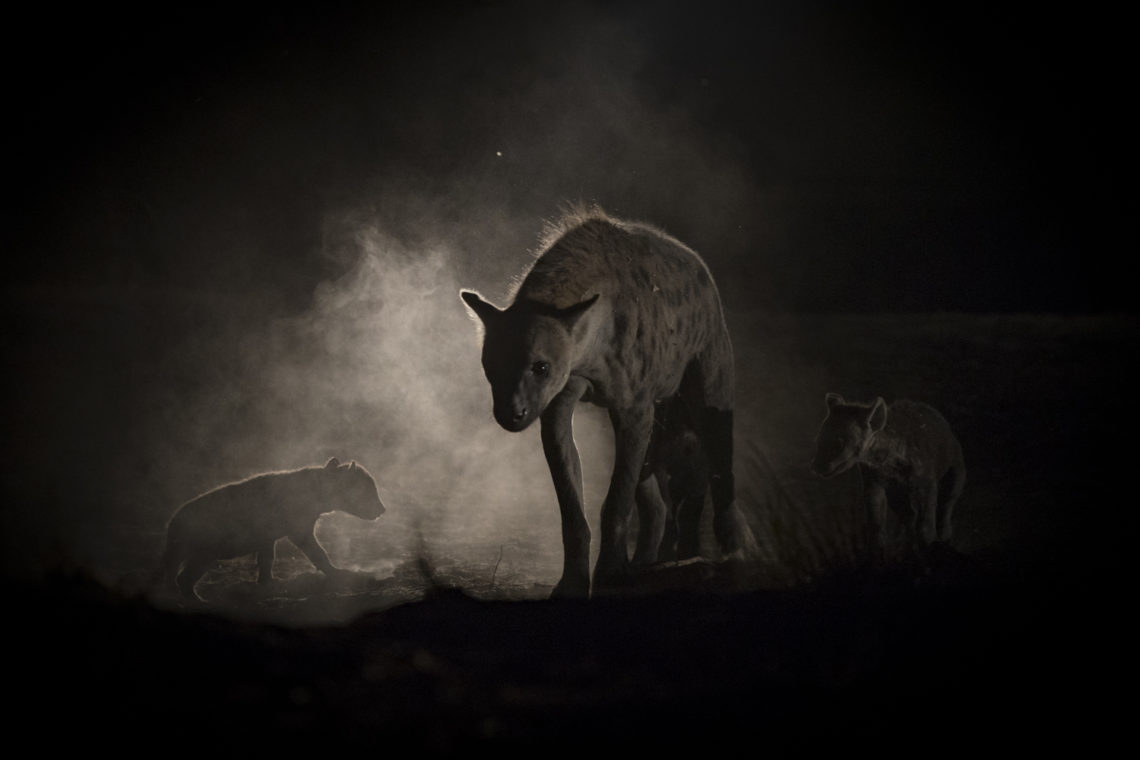