It took quite a while before this blog appeared, but it’s like that with all good things right?

So we started off the end of August in Windhoek very curious about whether the car would be ready or not. Since ‘this is Africa’, of course it wasn’t. We had a little accident on our last trip, which you can read (and see) right here. At the end of that last trip we also ordered a little cupboard for the car, since I struggled with the very clunky box that contains most of the ‘kitchen stuff’. That box had a heavy wooden lid on top and everything was on top of each other, so getting stuff out there was always a mission. Anyway, turned out that getting stuff ready in time in Africa is even a bigger mission!

So we decided to take it easy and go on a test drive with the car to Ameib Ranch Campsite near Usakos, somewhere west of Windhoek. Jens was there before and he really liked it and I’m always up for new places, so off we were! 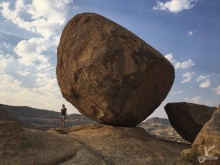 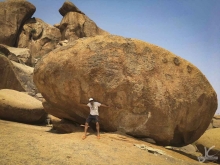 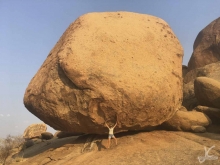 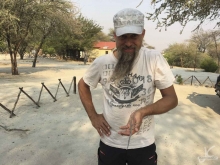 As you can see it was really nice indeed. A beautiful landscape where you realize how small you really are… The campsite itself is very cosy and the ice-cold pool was truly a bless after we did a hike to a cave with some rock paintings. Jens even let me drive the car again (imagine!) and we saw some giraffes wandering around! Spoken of a lucky day… It was a nice ‘weekend out of town’ and a good test drive since some things still needed some attention. So again workshop and still waiting for the cupboard. When it was supposed to be done we went there to fit it in the car and turned out… it didn’t fit! This is Africa… They made it too big, so now they had to cut the newly made cupboard and we had too wait even longer.

Anyway, after a little delay we finally were off to Botswana! On the program was visiting some friends in Maun and Khwai and then  Nxai Pan before heading off to Zimbabwe and Mana Pools. 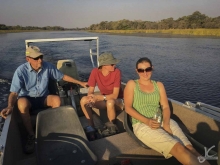 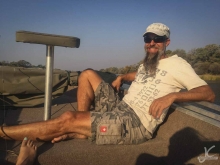 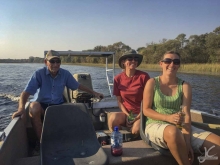 First stop was Maun. It’s always nice to have friends all over the world and to feel at home in different places. Since they live at the water, with a beautiful view and a spectacular sunset (and rise), we went for a boat ride one day. I love boats and water and it’s so much nicer than driving about an hour through town to get to the other side of the river… Also quite timesaving obviously…

Next stop was Khwai, the gateway of the Okavango Delta. It’s one of our favourite places in the world and not only because it’s where we met… It’s simply a beautiful place with amazing wildlife. And having friends there is obviously a big bonus!

This time we had a sighting we never saw before in Khwai. Maybe because they had so much rain last rainy season? One of the remaining ponds had a huge family of pelicans. We already found them one evening, but then it was just pretty shooting them with the sunset behind. Another morning we suddenly saw them flying up all at the same moment! An incredible thing to watch really! They basically fish synchronically. They start at one side of the pond and swim a certain direction and then, as if someone gave them a sign they all fly up to end up a bit further trying to get all the fish out. There was one hippo in that same pool who wasn’t too happy with the pelicans going all crazy. He tried to make that clear to them, but since they didn’t got the message, he left himself in the end and just wandered off in the bushes in search for another, more quiet bathtub. 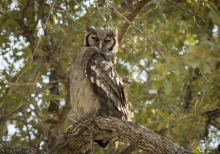 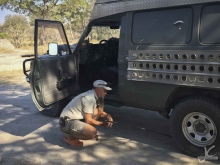 Another nice and different sighting where two owls sitting on a branch in a tree right next to the road. A lilac breasted roller payed them a visit and seemed to be talking to one of them. The owl wasn’t really interested anyway. He just looked at him in a bit of an arrogant way. Pretty to watch though!

We had a little bit of bad luck as well… a flat tire! Not all holes in the ground are easy to avoid apparently. But handy Jens fixed it in no time!

After Khwai we head on to Nxai Pan. We love this Park as well, since it’s quite small and there’s always something to see. This time we got spoiled by a pride of lions. There were lots of them and especially lots of cubs. They are so adorable and playful. Really fun to watch. One day we where lucky to have a some lionesses on babysit duty with a bunch of cubs right next to our car. One cub was so curious he came checking out the car and then lay down in the shadow of our car.

Our last stop for the month and before I would fly back home, was Mana Pools in Zimbabwe. You can read all about the rest of September in the next blog post! To be continued…