Khwai is always been a special area for us. Not only since we met there (romance alarm!!) or because of friends who live and work over there, but mostly because of the area itself with all its animals and the possibility to do a night drive and to drive offroad. It’s the beginning (or the end, just depends how you look at it) of the Okavango Delta and if you really want to see a leopard, this is the place to be!

On our way there, Jens found a chameleon on the road. He’s really amazing when it comes to finding animals (as small as insects, I swear!) on the road. Not only on the road obviously… We were a bit concerned about driving into Khwai this time, since there had been so much rain that some water crossings were simply too deep. And after a bad experience (and a broken radiator), Jens is not really a fan of them. The rain had been so much more than normal (more than double!), that it wasn’t only the crossings, also part of the roads and the campsites were entirely flooded.

Luckily we’ve got good friends over there and they offered us to join them on the game drives so we didn’t need to drive our own car nor camp in the flooded area. Yay for good friends!

One day we found a male lion. He walked up very close to our car where he crashed down for a little nap, so we started  to make some close ups. And while we’re doing that, he all of a sudden starts to roar. What a cool experience to have a lion roar so close to you! We found him back at night since he had a clear message to spread, so he was roaring quite frequently. The leopards were also present, as always, although they didn’t make it easy for us this time as you can see. The sunset didn’t let us down and was beautiful dramatic this time. Like a painting!

The last day we wanted to try a time lapse to see the waterlelies open in the morning. It takes quite a while though, so meanwhile Jens spotted a tiny little frog in the pond and started to take some pictures of it. I took pictures of him taking pictures and went for selfies with the timer on my phone. You’ve got to keep yourself busy in the presence of a wildlife photographer with a lot of patience, right? 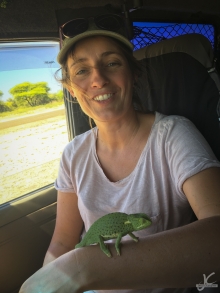 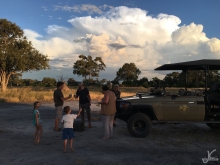 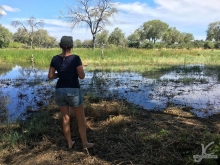 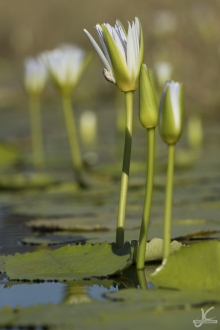 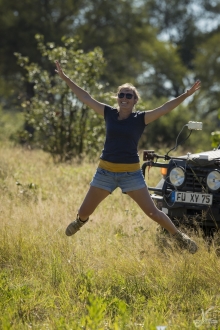