After a short visit with friends in Maun we started this trip in Nxai Pan. It’s a park where there’s always something to see it seems. We would stay four to five days and since we booked last minute we had to change campsites a few times. Luckily we’re quite mobile anyway and the campsites are close to one another. The very first campsite was the one looking out over the pan, quite close to one of the ablution blocks. There were some elephants around, which is always nice of course. But one of these elephants was injured pretty bad at his belly and he tried to get some water out of the pipes coming from the ablution blocks. They dug a hole in the ground exposing a waste pipe and every once in a while there was a power contest between some of the elephants for the key position at this waste pipe. A bit sad to see. For sure because the poor elephant was injured so badly.

The next morning we were up very early (as always) and right after driving out of the camp we bumped into two male lions. They weren’t intimidated the slightest by us and just continued their route until they found a place under a tree to go and lay down. The cars that were still in camp at that moment probably passed them later without even noticing them being there, because if you didn’t know it was hard to spot. Even with binoculars.
We drove a bit around, but couldn’t find too many animals that morning, so after a while we decide to try our luck at the waterhole. It turned out to be the best decision we could have made. The light was perfect and there was a big herd of wildebeests. In this whole group there was one zebra going along with them. Really funny. Would he think he’s a wildebeest too? A bit later a giraffe came walking our direction to come for a little drink. A very cautious giraf, as they always are, so it took quite a while before he reached the water. In the background there were some springbok, but they didn’t come any closer yet. A bit later they did, together with some ostriches, a few jackals and one impala. Nxai Pan is one of the only places where you can find springbok and impala together. Flocks of birds were flying on and off and that was also suite a spectacle to see.

After a nice morning drive it was time for breakfast/brunch and Jens shaved his beard while I tested my new inflatable couch. It turned out not really Africa proof since there are simply to many thorns everywhere. But hey, I had my little break. I say little since it was really hot these days and shade is not a given at some of the campsites. So Jens wanted to go out again in the afternoon as well, simply to get some air while driving (we don’t do ‘airco driving’ in the park). Off we were! Some people saw a cheetah with two cubs before and we were determined to find them. We did as well and the good thing was that we were there totally alone. Actually it wasn’t too busy these days, since we had been mostly on our own yesterday as well.
The cheetahs were laying down under a tree. The two little ones were really cute! Furry and they looked as if they just woke up, hair in all directions. A bit later we thought mom was going to get into action, but she simply changed to another spot next to an anthill. The cubs followed her. She did a few attempts for what looked like the beginning of a hunt, but in the end she just went laying down somewhere else again and the guns moved there as well. Beautiful to see though!

The next day we were lucky again. We were really early again and passed the waterhole when we suddenly saw five lionesses laying there. After a bit of searching around with the binoculars we also saw a male lion much further away under a tree in some bushes.
In the afternoon we saw an elephant really come for a bath, get entirely in the waterhole and afterwards walk away again. With everything hanging and swinging in between his legs. There were also some big birds like a bateleur, a secretary bird and a kori bustard and a few different vultures. The lions stayed quite close the entire day so some animals didn’t take the risk to come for a drink. 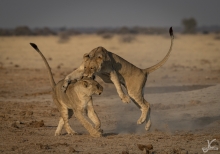 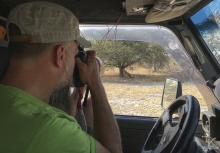 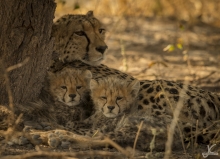 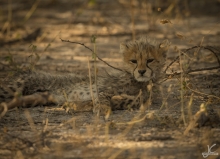 The last day of our stay we found the lionesses again very early morning and they were playing around which was great to see. And when the first cars started to come they stopped. It really pays off as you can see to get up early. Didn’t think I would ever write this voluntarily, since I’m generally not really a morning person! And when the lionesses left and took all the cars with them we got another show right in front of us: lots of springbok, impala, a giraffe, flocks of birds and a big bird of prey. We weren’t sure which one it was. It was a good last morning drive and next we would head towards Makgadikgadi Pans.

We decided to start of at Kubu Island. Although it’s really pretty and the view is just amazing I’m not a big fan, since I think it’s pretty expensive for a simple spot without any ablution and it can get a bit crowded as well. But again, the baobabs are lovely and make a nice scenery for photographs.

The next day we continued on the pan. It was really windy, so stopping for a snack or something like that wasn’t really easy. We wanted to have a look at Chapman’s baobab since we heard it fell down. On of the largest baobab trees and it even had become a monument of Botswana. Not anymore although it was still impressive to see. You could even walk in between the roots as they are always very shallow, so they came all out as well. 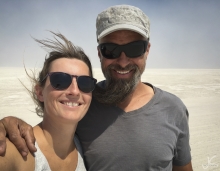 We drove on and found a little ‘forrest’ of aloe vera plants. The scenery at these pans is really special and at the sides of the pan you can find Meerkats if your lucky. We weren’t this time however.
For our last night we decided to camp on the pans. Everywhere around you there’s a simple straight horizon and the ground is this white cracked salt and sand. There is no noise, no animals, nothing. It’s quite impressive as you can see in the video below. The stars are amazing as well, since there’s almost no light pollution. It gets pretty cold at night and since we weren’t too well equipped to sleep under the stars, we decided to go for the car this time. But next time it’ll be stars again!

Back in Maun we went to the workshop with the car, for some checking up and turns out the front axle was broken! Lucky check… Little bit of a panic as well since we didn’t want to be stuck in Maun for a long time. An axle wasn’t always available right away. The stars were with us though, since by coincidence a brand new axle was returned to the shop that exact same day. And it was the right fit, so we got it. Even with a discount! Imagine the luck we would have gotten if we would have slept under the stars… 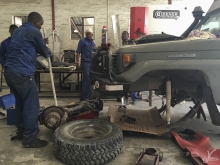 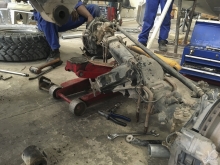