We started this trip in CKGR or the Central Kalahari Game Reserve. It is beautiful this time of the year right after rainy season, since everything is really green. We still had some rain every once in a while which gave us this beautiful rainbow at one point. Because of that it was also still muddy though at some stretches, as you can see on one of the pictures. We had to pull out a friend who got stuck. And every once in a while Jens plays mechanic since there’s some noise or he discovered something at a check up. Luckily he always pays attention in the workshops.

The picture of the little baby bat in the tree, got Jens the title Botswana wildlife photographer of the year (international category). It was actually a lucky find in a tree at a campsite here. And also the reason I had to eat by myself that day, since I got really hungry and the bat obviously was more interesting then food with company… 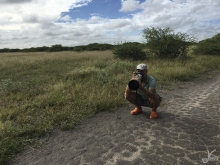 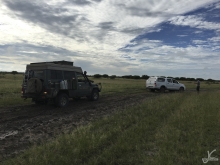 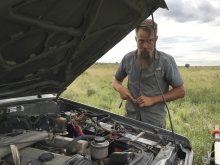 We drove out and first we went to Rakops in the hopes of getting fuel. Before we entered we tried, but without any luck. they were out of fuel. This time it sounded promising since they started saying they got fuel again, but soon became clear we wouldn’t get any fuel, because there was a power break down with power. It could be fixed any minute, but ‘any minute’ can take a really long time down here… So we didn’t wait and drove 60 km further to Mopipi to top up and continue our journey towards Nxai Pan.

We were lucky since we arrived there right at the end of the zebra migration. We got to see quite some zebras and also quite some actions. Zebras are mostly fun to watch. Not only because they are simply pretty and photogenic, but they are also never boring.

Giraffes can get a little boring sometimes, but this time we caught them in the middle of there mating ritual which is actually really entertaining to watch. They are truly patient animals, since it takes them a long time to get there. Lots of attempts and the female doesn’t seem to be bothered at all. She just kept on eating and walking, while the male jumped on her several times. It’s also a matter of aiming right, because he gets one shot only before the female continues her walk. This one ritual went on for hours!

While giraffes usually don’t migrate, there were lots of them this time as well. Right after the mating couple we found a little family running around. It was wonderful to see them this playful, since it looked as if they were showing the kid how to have a good time! Honestly adorable.

And lions can truly be boring as well, since they sleep about 20 hours a day, but we found them right after a hunt. As you can see they took advantage of the huge amounts of zebras around. And all of them tried to get there share. This one lioness decided it would be more safe to go and eat it somewhere on her own. Can’t blame her! 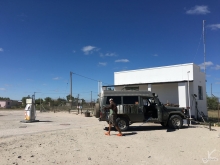 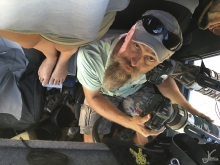 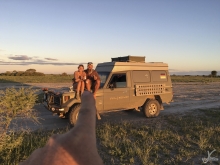 Our next stop was Makgadikgadi Pans. Since we didn’t trust it to drive on there by ourselves right after rainy season, we tried our luck at a lodge close by. By coincidence they had there very first expedition driving out that same afternoon, so we decided to join them. At the edge of the pan we first went to look for the Meerkats. A guide came with us and in no time he spotted them. They are such cute animals and if you’re lucky they come pretty close, since they are truly curious.

We slept under the stars, which was unbelievable and a must do if you ever go there! Walking up and see the sun rising right in front of you, while there is nothing around is truly marvelous! 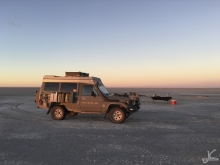 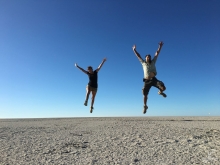 After a little stop in Maun to resupply, we continued towards Savuti. At first we weren’t too lucky on our game drives and the most exciting thing we saw the first two days was a hornbill flying out of the nest for the first time. On the pictures you see the father feeding it. In the end he simply showed the food, but didn’t feed him anymore, so he would be motivated to get out of the nest. The tree was right at our campsite, so we got to witness the whole thing, which was really incredible.

On our third day, we went for a last game drive on our way out and finally our patience got rewarded when we bumped into a playful pride of lions. They really went for it! After that we were able to drive out satisfied and continue towards Khwai, which would be our last stop in Botswana this trip.

We went to visit friends in Khwai, but it’s also a great place for spotting leopards. We found Mmatsebe and her cub again (you can read their story here). The cub got really big the past couple of months and it was so great to see them both again in a healthy condition. They were very playful and of course all of us wanted to take pictures of that, so sometimes it got a little crowed at certain places in the car…

We found playful and curious hyena cubs this time too. They came sniffing our car. We had to be careful though, since they love chewing tires and plastic… Right after sunset we found some hyena’s at their den. The headlights from another car, gave us the opportunity to shoot some pictures with nice sidelight.

Another evening we tracked down lions right after a kill. We didn’t witness the actual kill, but it wasn’t too long before. At night things get a different vibe and lions look more scary in a way then during the day. Probably also because they are mostly sleeping then…

We had a great trip and enjoyed seeing our friends again. Our time in Botswana came to an end and we flew to Cape Town for a last week of getting adjusted to the world outside of the bush again… 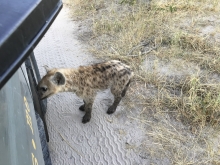