So we left Botswana and after a night in Bulawayo, we were on our way to the Zambezi Valley. A long drive with a stopover in Chinnoyi and again we stayed with people who became friends. It feels good to be at home in so many places in the world. This time we had another special stop before we would go to Mana Pools. 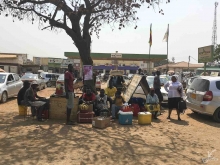 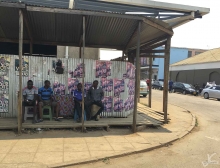 Past summer Jens had to go back and forth to Zimbabwe to sell his car and while he was waiting on the airport, another German was waiting there. As he was a bit bored and Jens looks like a possible criminal (the beard… and after all elections where being held in Harare), he googled him. Not too hard, since www.jens.me isn’t only on his car, but also on his laptop. That way he discovered both of them were from the same city. What are the odds?! Since Jens is a wildlife photographer, he invited him to come over and have a look at a project he’s been busy with.

He started Hemmersback Rhino Force, an organisation with a clear purpose: protecting rhino’s. Sometimes the goal goes a bit broader towards elephants for example. Ralph decided he would save 100 elephants by relocating them. Why? In Sango National Park (Zimbabwe) there were too many elephants and so they would have been culled. Therefore he decided to relocate them to RIFA, a former hunting concession he leased in the Zambezi Valley. It’s not an easy job obviously to get a herd of elephants from one side of the country to the other. The reason why it isn’t done more often, is also because the whole proces is quite expensive. And Zimbabwe isn’t really a stable and rich country. 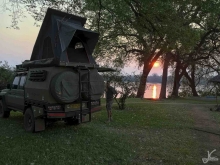 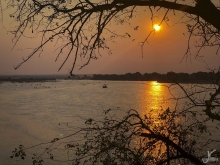 So we drove down to the Zambezi Valley, where we could camp and where we met amazing people. Not only Ralph himself, but also some truly skilled people when it comes to elephants and anti-poaching. Because when you want to relocate elephants you need to be able to protect them.

One of them is Pete Clemence. He and his two sons have been taking care of elephants and leading anti-poaching units almost their entire lives. We had a talk with him early in the morning while we were waiting for the elephants to arrive after a long trip. He’s such an interesting guy and only that talk taught me a lot! After some waiting we heard there was a problem with the truck. Something broke and the truck got stuck in a dry riverbed. We decided to drive there and take a look.

After some driving around we found a huge truck with 9 elephants inside, indeed stuck in the sand. Not only the sand seemed to be the problem, but also the truck itself, so the cabin needed to be replaced. Not an easy thing to do and for sure not in a dry riverbed with 9 hot elephants. Nevertheless everyone worked together and went for it. A tractor tried to pull the cabin out, but didn’t manage, then another truck arrived and with some help of the truck and the tractor they managed after a while to get the cabin off and change it.

The elephants had been there now for a while, so they started to get a little restless and thirsty. The crew decided to cool them down a bit first before they would leave for the last piece of the journey to release them. Jens decided to take a look inside. Amazing view, don’t you think? 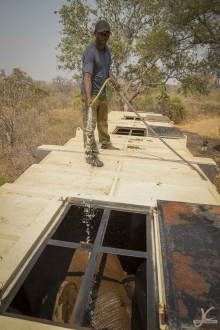 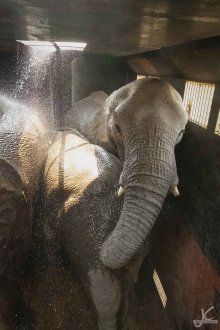 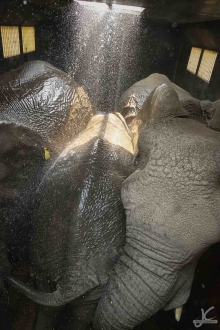 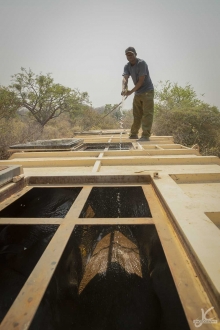 We drove back to ‘the boma’, a big round fence that is used to free the elephants in ‘stages’, so it’s a safe process for both elephants and people.

A camera crew of German tv, was waiting there to film the release. They followed the entire relocation, so they were also there when the elephants got captured in Sango. Long days and lots of driving! We told them the truck was on his way and waited with them. After a while it arrived. The next task was to drive as precise as possible to the big ramp built to release the elephants directly into the boma. That took some going back and forth, but finally they decided it was right.

The doors were opened, but it took a while to get the eli’s out. They were scared and didn’t know what was going to happen, so it seemed they rather stayed together in the safe space they were in, then going out. After a while the matriarch with some other elephants went out anyway. Not all of them yet. The rest got out later.

The matriarch of the herd gets a collar, so they are able to follow the little herd. They get captured in a herd, so not just same random elephants. 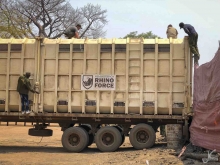 It was beautiful to see though. See them calm down and explore the place, go for a drink and play around with a tube they found. Soon they seemed very relaxed and so Piet decided it was safe to release them out of the boma. On the other side, they opened a piece of the fence and got the elephants to go that way. Before we knew it, they disappeared into the bushes and their new home. Such a great thing to witness…

Afterwards we stayed in a little camp closer to town and already direction Mana together with the film crew and Ralph. It was a pretty little camp, with a great view and cozy little tracks going from tent to tent. We decided to go on a canoe trip early in the morning before breakfast the next day. Jens wasn’t too looking forward. He once did a three days canoe trip to Mana and the hippos scared him every once in a while.

But we went and it was beautiful and very relaxed. And yes also sometimes a little scary with so many hippos close by and some horror stories in my mind… I think everyone was happy it was an hour and not three days, but I was truly thankful for the opportunity and loved it. 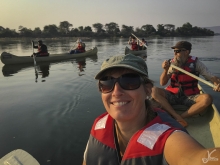 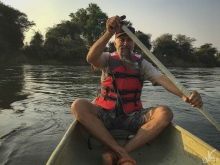 I enjoyed the two days in a little paradise before we would go to hot and dusty, but equally beautiful Mana for a couple weeks.