Where do you start when so many things happened? Mana Pools showed his greatness again this season and I think you’ll get it when you simply look at some pictures since they don’t need much explanation at all… Sometimes an image says more than a thousand words. The beauty of photography… Enjoy! 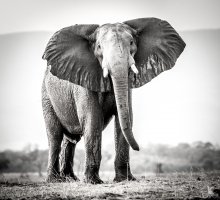 I had some troubles with my car this season as well. Difficulties with the starter engine were repaired on the spot. Always good to have friends in the bush! As I couldn’t help, this elephant was a good distraction for me! 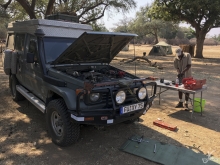 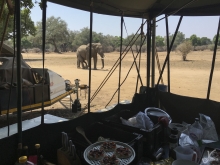 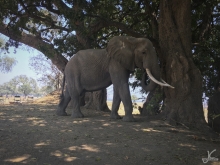 A few days later I was having a little break  after my morning game drive. I was alone, sitting quietly on the ground enjoying the surroundings. An elephant approached me and in nature there’s this law when it comes to territory: if you were there first, you’re fine. So he respects me and eats his way on around me. Isn’t it wonderful how peaceful this elephant approaches? Also when he comes suddenly very close, I keep my calm and he just continues collecting pods. Don’t you just love elephants?

Some more photo’s that will tell you their story better then I ever could. The running leopard was a special one for me, since it’s not always easy to spot leopards in Mana. This one was chased by wild dogs. And the last picture… Well having a long beard also provides me with some entertainment options as you can see… 😉 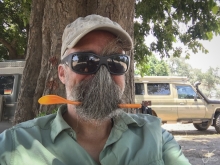 To end with, there’s one story I do want to tell, since it was a very dramatic one. It was late in the afternoon. As it was quite busy and everyone wanted to go and see the dogs this afternoon, I decided not to go there. Not a fan of too many people. I went to Chisasiko Pool, sat down and watched a crocodile positioning in the mud in a little corner of the pool.

Meanwhile cars passed by, heading towards the pack of dogs. Since they unfortunately were resting not too far away from the lodges, the news spread fast and of course a lot of the operators and tourists went there. Turned out the dogs got up late afternoon to go drinking. That’s what they mostly do after a nice rest and when it’s cooling down a little bit. Unfortunately for them there were some lions on their route towards the Zambezi, so they changed directions and headed towards Chisasiko Pool (friends told me later). Turned out not such a bad idea after all to avoid the crowds!

At that point I had no idea yet and was still sitting quietly to see what the hidden crocodile would do. Suddenly I saw a lot of movement: all the impalas ran in one direction and the dogs appeared. My happiness was very short since they headed straight to the side of the pool where the crocodile was hiding. What happened next was really shocking to see for me. Also because I’ve known this pack for years and got somehow attached to them ….

As the pack went for drinking, they walked up straight to the hiding crocodile. Suddenly the croc exploded from the water and grabbed one dog on his front leg and pulled him into the water.  The fight was really fierce and went on for minutes. The rest of the pack was as shocked as me. Wild dogs are very social animals. They were all around, but couldn’t do a thing. They were totally helpless. More and more crocs came and finished this brutal attack. The water became more quiet again. The dog was dead and lost his battle. You could clearly see the dogs realized that as well. They were traumatized and didn’t go for a drink anymore but walked away with their heads down to the ground. Such a sad image.

Taking these pictures was really hard. Other photographers at the scene were crying since we were all shocked of what we just witnessed. The quality of the pictures is less since the sun was already setting.

The croc had been successful so it tried it’s trick a few more times. Some animals had outstanding reflexes and others like this zebra here were not that lucky. It got free, but got eaten the next night since it was too injured. 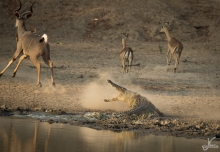 Despite the sad happening with the wild dog, it was a wonderful first month, where I saw a lot and also met amazing people. Mana Pools is a magical place and still had more than a month to go! Curious for more? Take a look here!